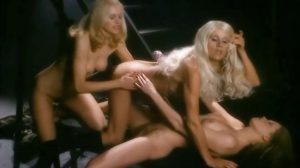 World War II is over and Gordon Laid finally returns home to London. He would like to start enjoying some relaxation, but he finds himself a murder suspect.
Let’s Get Laid is a film that gives us a lot of emotions because the female protagonist is the queen of British sexy cinema Fiona Richmond. With her red hair or an exciting blonde wig, Fiona makes us lose our minds in numerous sequences. Fiona delights us with a striptease, a bath in the tub, a sex scene with a thrilling kiss, and an unmissable lesbian threesome with Donna Scarff and Pat Astley. Three female soldiers undressing, caressing, and kissing.
If that’s not enough for you, Lisa Taylor, Linda Hayden, and Anna Chen are also naked in the film.