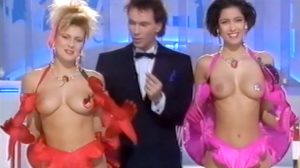 From the first season of the sexy quiz Colpo Grosso, the Cin Cin Girls were introduced, which later became Lucky Girls from the second season. In the German version of the quiz, Tutti Frutti, these girls were called Die Cin Cin-Mädchen.
Each of these beautiful girls was paired with a fruit. At the beginning of the episode, the contestants chose two of these girls, who opened their jackets showing their boobs. If there was a gold or silver symbol on one nipple, the lucky competitor earned extra chips.
The girls are the same as in Colpo Grosso: Alma Lo Moro, Jasmine Lipovsek, Nikki Foley, Stella Kobs, Angelique Rinkel, Natacha Velimirovic… In this monograph, we look at several boobs.