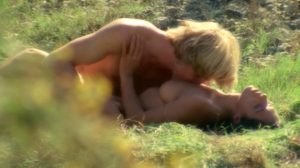 Clara Hopf today works as a makeup artist, but in the 70s she starred in a couple of films and we are sorry that she stopped because she was a good actress and also very beautiful.
One of these films is Una donna chiamata Apache, from 1976, in which Clara is credited with the name Yara Kewa. A young “blue soldier” of the US Army participates in a cruel punitive expedition against a small group of Indians who are trespassing from their reserve in search of food. The Indians are exterminated in front of the astonished face of the soldier, except a woman, whom he tries to save by taking her with him.
The film is made with few economic resources, yet the result is very valid: a love story between two people from two different worlds, in a context of strong racism.
But our job is to review nude actresses and Clara Hopf offers us several interesting sequences. This actress has a beautiful body!