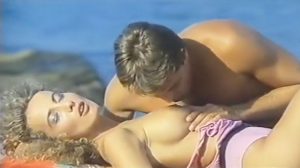 Actor Saverio Vallone plays a young man engaged to a woman older than him (Sonia Viviani). The age question is functional to the plot, but totally nonexistent in reality since the actor was 31 (in the film he is supposed to be 22) and Sonia Viviani was 28. One day, the man meets Sara (Margie Newton) and begins a clandestine relationship with her.
Una tenera follia is a 1986 romantic film by Ninì Grassia. The director’s softcore period had yet to begin, so we are dealing with a rather morose product.
After 35 minutes, Margie Newton finally shows us her breasts in a beach sex scene. She and the protagonist have sex on the rocks. Twenty-five minutes later we find the couple secluded among the rocks. It is the second topless scene in the film. A couple of minutes later, Sonia Viviani arouses us in a tight white T-shirt; her nipples are as turgid as spikes.