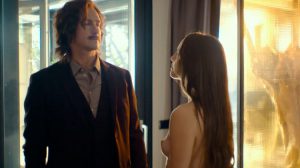 A large family meets for dinner on two different occasions over a ten-year period. In both cases, we discover rivalries and ill-concealed antipathies.
We have had a crush on Matilde Gioli since her nude debut. In this film, the actress gives us a breathtaking full-frontal nude. In an early scene, Matilde gets out of bed and shows herself naked and casual to a man who is in the rooms with her. In the second scene, Matilde is naked under the shower. Her body is perfect.