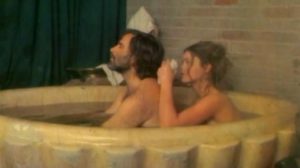 In 1527 the lansquenets, commanded by Charles III of Bourbon, invaded the city of Rome and sacked it for about ten months. About thirty thousand people were killed, as many were killed by the plague brought by the lansquenets.
In 1992, director Fabio Bonzi tells us a story set in those days, in an Italian-Russian production titled Zoloto (the Italian title is Oro). A painter, his assistant, and his muse and model live and work in a beautiful Roman house. Soon, their peace will be devastated by the arrival of the lansquenets and nothing will be the same again.
One of the first films for the beautiful Vittoria Belvedere, who gives us some shy nude scenes.