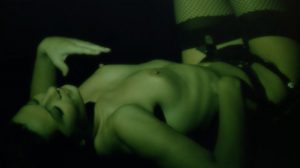 99 women (original title: Der heiße Tod) is a good movie with all the clichés of the “Women in Prison” genre: beautiful nude actresses, lesbian jailers, and prison uniforms that are made up of shabby dresses and stockings. Yes, they were not very reliable movies from a philological point of view.
Marie is a new detainee who arrives in this prison, on a remote island, and receives the number 99. The detainees are controlled by the sadistic lesbian guardian Thelma Diaz and it will not be long before Marie decides to escape from prison along with another couple of inmates.
The nude actresses of the film are Maria Rohm, Rosalba Neri and Valentina Godoy.
There are various versions of this film, with different montages and major or minor nude scenes. There is also an infamous French version with hardcore inserts, titled Les brulantes. Obviously, the hard scenes are not interpreted by the leading actresses but inserted in the editing phase. Of our interest, there is a short sequence with Valentina Godoy nude not present in other montages.