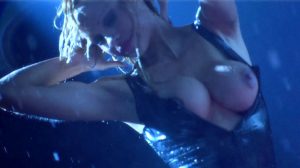 Pamela Anderson reached the top of her celebrity in the ’90s. She was one of the attractive bay watchers of the famous television series and was the protagonist of one of the first sex tapes that appeared on the net. This success took her to the cinema, where she played Barb Wire, a film inspired by the same character from Dark Horse comics. Unfortunately, the results were bad, with six nominations for the 1996 Razzie Award.
The criticisms do not stop us lovers of nude actresses. Maybe the film is not a masterpiece, but we enjoyed the fundamental parts, the ones in which Pamela Anderson is naked!
In the first scene of the film, Pamela Anderson dances sheathed in a leather dress, which squeezes her tits. From under the stage, someone sprays her with the water hose. She dances, all wet, and her tits slide out of her dress. Pamela Anderson‘s boobs are two perfect circles. In the uncut version of Barb Wire, this scene is much longer and we can dream of facing her perky boobs for a long time. Next, Pamela shows us more nudes, including an intriguing sequence while she bathes in a transparent tub.