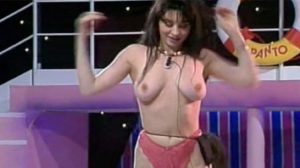 When we told you about the competitors of Colpo Grosso, the famous Italian sexy quiz, we told you that some had already worked in the entertainment world.
One of these was the porn star Manya (also known as Mania, Manja and Melissa Magowan). Between the end of the 80s and the 90s Manya produced a fair number of hardcore films. In these same years he also participated as a competitor in Colpo Grosso, not once but twice. The first time in a brown version, the second in a blonde version, in the last season of the show. We dedicate a monograph to her because we know her fans are numerous.