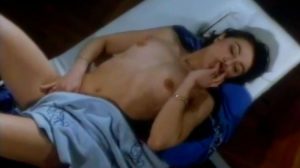 Delitti a luce rossa is not a movie you watch for the plot, which is rather banal. A man wants to have his wife killed so he can be alone with his lover without any divorce problems. This rare erotic thriller by Pasquale Fanetti is watched for the two lead actresses: Gabriella Barbuti, as the wife, and Sara Cosmi, as the lover. Two beautiful actresses who undress a lot in front of the camera.
The first sex scene comes after six and a half minutes. Sara Cosmi undresses for a long oral sex scene. Soon after, the inevitable shower, with breathtaking full-frontal nudity. Sara Cosmi also stars in the following scene, in which she performs as a sexy dancer. At the same instant, Gabriella Barbuti undresses and starts reading a book in bed, topless and in black stockings.
After only one minute, we again admire Sara Cosmi, who performs a private striptease for her man. Sixteen minutes later, a man gives Gabriella Barbuti an erotic massage. Long and very exciting sequence. Four minutes later, the actress emerges naked from a pool and goes to take a shower. A man joins her and the two have sex. One minute later, we find Sara Cosmi naked, in bed, on top of her man.
Fifteen minutes later, Gabriella Barbuti is in bed with her man. The two are having sex. Six minutes later, the actress is lying on the couch trying to arouse a man. The last hot scene of the film is given to us by Sara Cosmi.