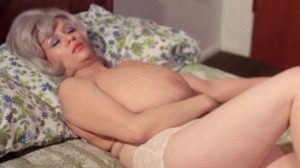 Double Agent 73 is a kind of Deadly Weapons sequel. Doris Wishman, who shot both films in the same year, still directs Chesty Morgan as a secret agent.
The drug king is filling the streets with very low-quality heroin. Agent 99 gets a clue as to the identity of this mysterious crime boss: he has a giant scar on his face. Agent 73 (Chesty Morgan) infiltrates the underworld with an implanted breast camera to photograph suspects.
Chesty Morgan is intriguing from the very first scene. She’s sunbathing in a meadow, in a black bra and shorts and tights. A few minutes later, the woman is lying in bed, with her breasts exposed. She just got her video camera implanted. Then, Chesty is admiring her tits in a mirror, ready for action.
Three minutes later, we witness the classic scene of the spy photographing documents secretly, but in this case, Chesty Morgan takes pictures with her tits!
Interlude: Jill Harris wears only her underwear, garter belt, and black stockings. She takes off these few clothes and goes into the shower. Shortly after, we see a Psycho-style sequence.
Let’s go back to Chesty Morgan, who continues to take pictures with boobs and knock out enemies. The breasted spy still undresses in various scenes, until the epilogue, in which she shows us a quick full-frontal nude, with her pussy covered only by sheer pantyhose.