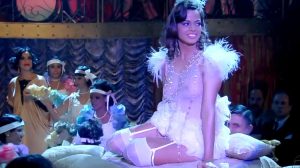 Gabriela, cravo e canela (Gabriella, carnation and cinnamon) is a novel by the Brazilian writer Jorge Amado, published in 1958. From this novel, a famous Brazilian soap opera starring Sônia Braga was based in 1975. In 1983, the story was told in a film, again starring Sônia Braga. In 2012, the third remake of this story was made: the Brazilian soap opera Gabriela. This time, Gabriela is played by Juliana Paes.
This soap opera comprises 77 episodes and is very rich in nude scenes, so much so that it was screened in Brazil at night. We watched all the episodes to compile a list of naked actresses and hot scenes.
In the first episode, we meet Gabriela (Juliana Paes), a beautiful woman who is washing in the river. The sun reflects on her wet skin and we sense from the first moment that this woman has a high erotic charge. Further on, Leona Cavalli, another protagonist of the series, is having sex with a man and shows us her perfect round tits. Towards the end of the episode, Juliana Paes makes love between the branches.
Juliana Paes takes a very exciting bath in the second episode; Emanuelle Araújo has a breathtaking sex scene and Ildi Silva shows us her ass in the fourth; Juliana Paes has sex at the end of the fifth and does it at the beginning of the sixth. In the sixth episode, we also enjoy a nude by Heloísa Jorge.
This soap opera is a triumph of nudes. Juliana Paes undresses in episode eight, Bruna Linzmeyer does a private striptease in episode eleven, Juliana Paes has sex in the twelfth, Bruna Linzmeyer does another striptease in the seventeenth, Maitê Proença has sex in the eighteenth, Giovanna Lancellotti takes a naked bath in the nineteenth, Juliana Paes still has sex in the twentieth.
Giovanna Lancellotti has sex in the twenty-third episode, Suzana Pires and Maitê Proença have sex in the twenty-fourth, Raquel Villar shows off in transparent lingerie in the twenty-fifth and has sex in the twenty-sixth, Juliana Paes is naked in the bathtub in the twenty-ninth and in the 30th episode, we get excited with Nathália Rodrigues.
Episodes 31 to 40 open with Raquel Villar naked and continue with a Suyane Moreira striptease, a sex scene with Juliana Paes, Giovanna Lancellotti naked and Bruna Linzmeyer dancing half-naked.
In the second part of the soap, from the forty-first to the seventy-seventh and last episode, the nude scenes drop dramatically, but we enjoy other nudes by Suzana Pires, Heloísa Jorge, Vanessa Giácomo, Luiza Valdetaro, Giovanna Lancellotti, Luiza Valdetaro, Suyane Moreira, and of course Juliana Paes.