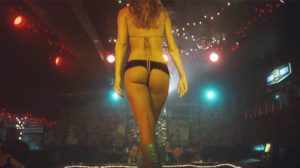 The best way to talk about nude celebrities during Halloween is to present some nude scenes from the movie Halloween! The character Michael Myers has been blizzarding the nights of the horror films fans since 1978 and his saga has lasted for many years. Today we talk about the nude celebrities in the reboot, that means in the ninth film of this franchise, released in 2007 and which incorporates the original title: Halloween. Filmed by Rob Zombie, the film presents us a lot of bare skin, that one of Hanna Hall, Danielle Harris and Kristina Klebe. In addition, super sexy scenes for the fabulous Sheri Moon Zombie, who is also the director’s wife. Have a frightful Halloween Night!