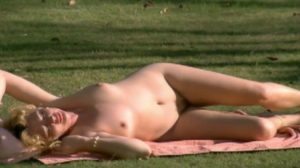 Sueca bisexual necesita semental also has an Italian title with which it’s more famous: I vizi della signora. Officially i’s an entirely Spanish production, but there may also be some Italians in the making of this movie, such as the director Andrea Bianchi.
The film was made in four versions, two for Spain and two for Italy. The Italian uncensored version, I Vizi della signora, differs from the Spanish version due to the many cuts made in order to insert the hardcore scenes.
The film tells the story of Felipe, an old intellectual forced into a wheelchair after an accident. He finds comfort in looking at his young wife secretly with his lover.
Marina Lotar, Nicole Segaud and Francisca Navarro are the three actresses who delight us with numerous erotic sequences.