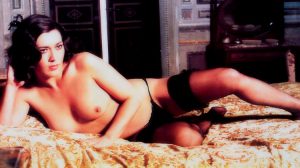 We are in Italy, in the 1930s. Gerard has just lost his wife Leonora (Andrea Guzon) and all that remains of her are a series of tapes recorded with her voice. Erotic recordings.
Leonora had a double life. During the day she is a respectable wife, at night a whore in a brothel.
After her death, her sons come under the tutelage of their stepfather Gerard. Their names are Ursula and Edmund and Gerard hadn’t seen them for many years. Ursula is identical to her mother, and in fact, she is played by Andrea Guzon. It is not easy for Gerard to resist temptation, and Ursula does everything to seduce him.
Andrea Guzon undresses for the entire duration of the film, showing us full-frontal nudes and scenes of great eroticism. There is also a lesbian sequence, between Andrea Guzon and Laura Gemser.
Another protagonist of the film is Lilli Carati, who plays Gerard’s lover. Lilli also gives us some breathtaking sequences. And Lilli has a lesbian sequence too, with Laura Gemser.