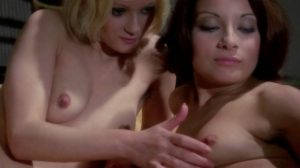 A wealthy patriarch of a noble family dies, leaving a group of heirs to share the inheritance. A few days later, one of the nephews is murdered, and he’s only the first on the list. A mysterious woman seems determined to eliminate the whole family…
Marzia Damon opens the nude scene sequence by seducing a waiter and then having sex with him in a concrete coffin (!). Ten minutes later, Marzia is still fucking, but this time on a Persian carpet. In the following scene, Susanna Levi strips in front of the mirror, showing us a nice pair of tits.
After the first murder, the nudes are back, with a sex scene starring Annamaria Tornello. Marzia Damon is the nude protagonist again. In the following scene, she turns us on in a hot threesome with her man and a blonde actress we don’t know. Very long and very exciting scene. Afterward, Susanna Levi has sex with her partner in a bed.
The list of nude actresses is not finished and later we can admire Camille Keaton naked, in her bed. The latest hot scene is offered by Marzia Damon.