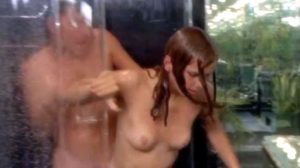 Fresh from the success of Bora Bora, director Ugo Liberatore makes another erotic-exotic film: Incontro d’amore a Bali. Unfortunately, the film is unsuccessful at the box office and the producer calls in a second director, Paolo Heusch, to fix the situation. A few scenes are added with Ilona Staller, who makes her big-screen debut with this film and is credited as Elena Mercury. The title of the re-edited film is Incontro d’amore, and it’s more successful.
The film opens with some tense sequences. We can see Ilona Staller naked, from the back, getting out of bed. A moment later the actress is in the shower and gives us a nice full-frontal nude. Fifteen minutes later, we are getting aroused by Laura Antonelli, who is wearing a black bikini.
Five minutes later there is a scene with Petra Pauly naked, in bed. A very interesting actress, she only acted in a handful of films in the late 1960s and early 1970s. A few minutes later, we find Laura Antonelli naked in bed.
The last two hot sequences in the film feature Ilona Staller. The first is a long and intriguing sex scene. The second reprises the beginning of the film, but more comprehensively.