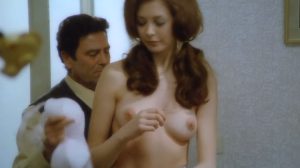 Mr. Berzaghi is a widower and has a 25-year-old daughter, very beautiful, but with mental problems. One day, the girl is kidnapped and forced into prostitution. A compassionate police inspector relentlessly searches for the girl, but the search ends with bad news.
In the film, we can admire a nice topless by Gillian Bray, who shortly after raises her skirt and shows us stockings and suspenders. In the film, we can also admire a very rare nude of the Milanese model Maria Grazia Bettini, who has never acted in other films.
Beryl Cunningham also undresses in the film, in a couple of intriguing scenes.