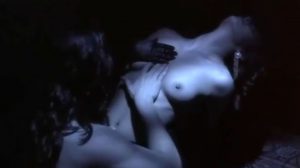 While they are naked in a bed, exchanging sapphic effusions, Malù and Valentine Demy have a brilliant idea: to open a brothel. A high-class brothel with themed rooms. A few years later, the two succeed in the enterprise. One day a charming long-haired man arrives at the brothel. Unfortunately, he’s a policeman, and he came to arrest Malù. An arrest for pimping? Absolutely not! The policeman compliments the place. He has to arrest Malù for tax reasons. However, the man falls in love with Malù, but since he’s loyal to his duty, he stops her anyway.
Lambada Blu is probably a film made with the sole purpose of putting together a few nude actresses for the pleasure of the eyes. Almost everything takes place inside this club and we witness sex scenes interspersed with lambada and can-can ballets.
Next to Malù and Valentine Demy, there are several other beautiful girls, some totally unknown. Their names are Antonia Mais, Cristina Lastri, Valentina Goya and Kim Streep.