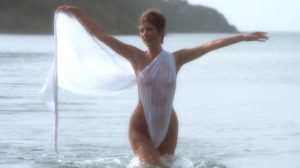 Because Lisa (Monica Vitti) is tired of her husband’s lack of interest, she begins a clandestine relationship and candidly tells him about it. With ease, the husband accepts his wife’s betrayal and invites her lover for a weekend in their villa by the sea. In order to settle the score, the man invites his sexy secretary (Barbara Bouchet). An apparent goodbye weekend for a couple on the verge of divorce could turn into something completely different.
At the beginning of the film, Monica Vitti wears a very intriguing evening dress, with a transparent shirt that reveals her breasts. A couple of minutes later, we witness a dream scene: Monica Vitti is wearing black lingerie and stockings with suspenders. Later, Monica wears a robe with nothing underneath. Her swollen nipples push on her fabric.
A quarter of an hour later, Barbara Bouchet comes out of the sea like a mermaid, completely naked, wrapped only in a transparent white sarong. It is 1975, and the actress is at the height of her beauty. She walks down to the beach and lays on her stomach, showing us a perfect round ass. A wasp stings the actress’s ass and in the following scene, we see Monica Vitti trying to get the sting out of Barbara Bouchet’s butt. Half an hour later, we can get aroused in front of Barbara Bouchet, naked, lying on the bed, ready to have sex with her partner. Shortly after, we witness another dream scene. Monica dreams of living in the Sicilian hinterland and discovering her husband in bed with Barbara Bouchet, killing both of them with a shotgun.
Eight minutes from the end, we enjoy the last scene with Barbara Bouchet naked, running topless, all wet, after taking a bath in the sea.