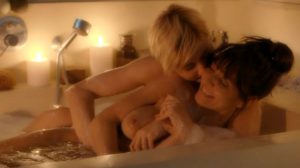 Massimo phones his wife Antonia (Cristiana Capotondi) and tells her that he’s about to go home. He has to tell her something important. She waits for him, but her husband will never arrive because he died in an accident. Days later, Antonia discovers that her husband was having a romantic relationship with another man.
After more than twenty years, director Ferzan Özpetek tells a story that he had already told in his 2001 film, Le fate ignoranti (The Ignorant Fairies).
Obviously, in the development of a television series, the story told in that film is just a starting point and other details, other characters, and other stories are added.
There are many tight shirts and swollen nipples in this TV series, but the nude scenes are in hiding. However, there is the nude debut of Ambra Angiolini, a nude that we have been waiting for for more than twenty-five years. The wait was rewarded because Ambra Angiolini nude is gorgeous. She has perfect breasts and a fabulous body.
To add joy to joy, Ambra is naked in a lesbian sequence in the bathtub, together with the intriguing Anna Ferzetti.
Not nude, but very sexy, there are Cristiana Capotondi and Paola Minaccioni.