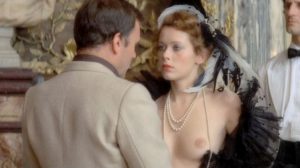 Alain Robbe-Grillet disassembles the mechanisms of cinema to surprise the viewer. To protect his daughter from kidnappers, a banker takes her to a mansion full of kidnapped girls awaiting ransom. In the villa, a variety of sexual depravities are performed, and we are sure that the plot is confusing you. In order to bring clarity back to our minds, we think of nude actresses.
In a railroad tunnel, Christine Boisson shows us the first boobs. Afterward, a man lifts Nathalie Zeiger‘s skirt to inject her. Now it’s the turn of Anicée Alvina, who is getting dressed with the waitress’s help. The actress shows us her small and perfect breasts.
Christine Boisson removes her dress in the next scene and shows off her full frontal nudeness. Fabulous. Uncredited, Virginie Vignon appears shortly after with red hair and black lingerie. Minutes later, a man undresses Nathalie Zeiger in front of a group of people. This is followed by a long sequence of Anicée Alvina‘s full-frontal nude. After taking a bath in the tub, she goes to bed with a man.
The film continues with three intriguing sequences starring Sylvia Kristel. The actress is naked and lying on the straw, then she is engaged in a photo shoot. After a long scene, Christine Boisson pretends to be dead and performs a nude funeral for us.
The following scene shows Anicée Alvina naked, in a somewhat blasphemous position, watching Sylvia Kristel undressed. In the last nude scene, Christine Boisson comes out of a trunk completely naked and watches two men playing cards.