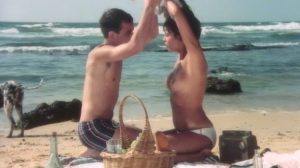 The film is internationally known under the title Private Popsicle, while its original title is Sapiches. For chronological reasons, we catalog it as Lemon Popsicle IV, as it is the fourth installment of a successful series of Israeli films.
After the school adventures of chapters one and two and the beach holidays of the third, this fourth episode takes place in a barracks, in which the three protagonists of the series are on military service.
The recipe is always the same: comic gags, a pinch of romance, and some topless.
The nude actresses in the film are Bea Fiedler and Sonja Martin. Bea Fiedler gives us a couple of hot sequences at the beginning of the film. Much later, we can admire Sonja Martin in a beautiful scene on the beach, first in a super sexy wet t-shirt, then finally naked.