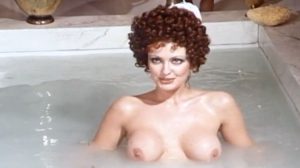 Messalina (Anneka Di Lorenzo) is the wife of the Roman emperor Claudius and an insatiable nymphomaniac. For the duration of the film, we witness her mating with soldiers and brigands. Occasionally, Messalina goes to work in the brothel as a prostitute, under a false name.
Messalina, Messalina was made using the same sets and costumes made by Danilo Donati for the film Caligula. Without asking permission to do so. The main actress is also taken by Caligula: she is the beautiful and unfortunate Anneka Di Lorenzo, Pet of the Month in 1973 and Pet of the Year in 1975.
All the nude scenes are starring Anneka Di Lorenzo, who gives us beautiful full-frontal nudes. Anneka undresses in several sequences, accompanied by a cast of comedians very popular in Italy in the 70s.