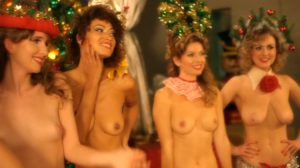 Late 1970s. A young feminist journalist teams up with an unscrupulous editor to start an erotic magazine for women.
In the first episode, the protagonist is visiting the editorial office of a pornographic magazine. There are some models, and we recognize Trishna, who shows us tits and bush while smoking a cigarette.
The second episode opens with two nude actresses engaged in a school character photoshoot. Jessica Lowe plays the teacher and Kim Senser plays the student. In the third episode, Olivia Rose Keegan plays a sexy she-devil.
In episode five, Sophia Bui and Trishna are topless in a crowd of people, ready for a photo shoot. In episode eight, we can admire Amber Amato‘s beautiful boobs.
Episode nine: Jessica Lowe and Lennon Parham are engaged in a lingerie photo shoot. At the same time, on another set there is a group of topless girls, consisting of Bianca Cook, Grace Gordon, Kiersten Hall, and Kim Senser.