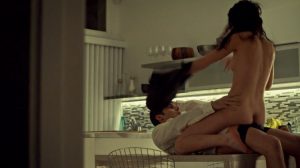 Sarah Manning (Tatiana Maslany) is an orphan girl who has an absurd idea: she assumes the identity of a suicidal woman identical to her. Sarah begins living this woman’s life, spending her money and trying to solve her problems. Soon, Sarah discovers a shocking truth: the suicidal woman was not simply a woman who looked like her, but she was one of many outstanding clones of hers. And a killer is killing them one by one.
Orphan Black gives us action and mystery, but also some very interesting scenes with Tatiana Maslany naked.
In the first episode, the intriguing Tatiana Maslany offers us sheer black lingerie and then a nice cowgirl sex scene. In the fifth episode, Tatiana gives us another sex scene, this time in the shower.
In the eighth episode, we can admire the latest nudes of Tatiana Maslany, and also a soft lesbian scene with Evelyne Brochu.