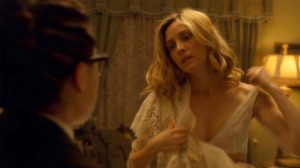 Orphan Black comes to an end. The beautiful TV series that told us mysterious stories of clones ends after the ten episodes of the fifth season.
As for the nude actresses, let’s do a quick recap. The first season showed us several interesting sequences. In the second season, almost nothing was seen. Season 3 brought some hot scenes and even some soft lesbo. In the fourth season, no nudes, but a lot of sexy scenes.
In this fifth season, the scenes for us collectors of nude actresses are present only in the second and fifth episodes.
In the first scene, Tatiana Maslany wears a white dressing gown that reveals her breasts. In the second, Tatiana is walking in the corridor of a hospital with a gown that reveals her ass.
In the fifth episode, there is a soft lesbian scene between Tatiana Maslany and Evelyne Brochu, wearing transparent lingerie.