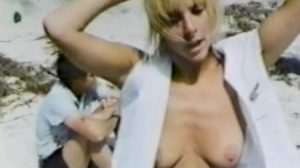 Paradiso Blu is one of the Caribbean films made by Joe D’Amato. The plot is simple: following a plane crash two passengers end up on a desert island. The two castaways are a teenager and an air hostess. For the young boy, this drama immediately turns into a dream: to be alone on a desert island with a stunning blonde.
In the part of the blonde hostess, we find the beautiful Anna Bergman, Swedish actress, and daughter of the director Ingmar Bergman. A couple of sequences also for Lucia Ramirez, an actress literally taken from the street and who only acted in D’Amato’s Caribbean films.