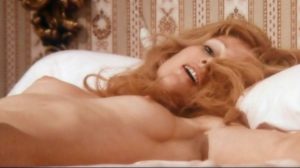 Teenage disturbances were one of the most beaten strands in genre cinema between the 1960s and 1970s. We loved aunts, stepmothers, maids, teachers, and so on. In 1971, director Daniel Daërt put aunt and maid together and made this Chaleurs (AKA S for Sex AKA Amami dolce zia…).
Patrice is a boy totally infatuated with his beautiful aunt Nadia (Nicole Avril). He secretly photographs her, spies on her, and dreams about her at night. The boy has an erotic affair with the maid Chantal (Karine Jeantet) and devises a plan to bed his aunt. His uncle will have to cheat on his wife with the maid, and Patrice will console Nadia.
Nicole Avril welcomes us by showing us her tits at the beginning of the film. Soon after, the protagonist spies on the beautiful Nicole while she’s getting dressed. We can admire first her tits, then her ass. Ten minutes later, the protagonist is still spying on a naked woman. This time it’s the maid, played by Karine Jeantet, who is in bed doing crossword puzzles, waiting to go to sleep. When the girl turns off the light, the boy goes to spy on Nicole Avril, who is having sex with her husband.
The protagonist is a professional spy, and the next day he peeks with the help of a mirror at maid Karine Jeantet, while she’s changing her clothes.
Karine Jeantet also stars in the following three nude scenes. We see the actress first naked in bed, then as a model in a photo shoot, and finally while having sex on a lawn.
After a couple of brief sequences featuring Nicole Avril‘s boobs, the third nude actress in the film appears: Alice Arno. Redhead with perfect breasts, the woman is having sex with a man during a party. The last scene of the film can only be sex between aunt and niece.