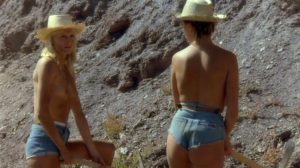 A married couple on their honeymoon stops in a deserted heath to have sex in a car. The two don’t know that they are on the property of a women’s penitentiary, run by the tyrannical Magda Urtado (Ajita Wilson). The newlywed (Uta Koepke) is imprisoned on a false charge; her husband becomes the torturer’s erotic plaything.
Sadomania – Hölle der Lust is yet another WIP (Women In Prison) by director Jesús Franco, with the main purpose of bringing many naked actresses to the screen. Mission accomplished: they all undress, jailers and inmates.
The first sequence is a classic forced labor scene, under the sun splitting stones. In this case, the female prisoners work topless. Among the many, we recognize Andrea Guzon, Nadine Pascal, Ursula Buchfellner, and Uta Koepke.
In the following scene, Nadine Pascal is locked in a cage, while all the other female prisoners return to their cells. All of them are topless and in tight shorts, of course, one of the regular uniforms of WIP movies.
Later, Nadine Pascal runs naked through the swamps. At the same time, Andrea Guzon, Ursula Buchfellner, and Uta Koepke are in their cell, topless. Two guards enter to pick up Ursula.
There is no lack of lesbian scenes, and we can get aroused by two hot blondes, Gina Janssen and Ursula Buchfellner, kissing and licking each other on a bed. At the same time, in the cell, Andrea Guzon and Uta Koepke are doing the same thing.
Prison guards are also topless, and in fact, we can admire Patricia Quow‘s boobs as she keeps a watchful eye on the women breaking rocks. Patricia Quow also stars in a fight scene with Andrea Guzon to amuse the prison warden.
An hour into the film, Ajita Wilson also finally gets naked in an exciting and lengthy sex scene. Various other nude scenes follow. Tania Sandoval is also added to the long list of nude actresses.