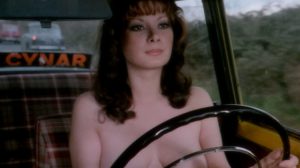 Marcella (Edwige Fenech) works as a taxi driver in the car she inherited from her father. Business isn’t going well, and the girl is also recovering from a shipwreck romance (she didn’t know her partner was married). Among her many misadventures, Marcella finds herself involved in the trafficking of a drug trafficker mafia.
Edwige Fenech, the absolute protagonist, strips little (but she strips) and doesn’t spend much time in the shower in Taxi Girl, a comedy more than a sexy comedy.
Also, the film seems to parody 70s Italian detective films. The actor Gianfranco D’Angelo plays a traffic cop who constantly mentions the titles and characters of these films (there is a memorable sequence with Squadra antiscippo movie poster behind him).
Nude scenes are few, but they are not to be missed. Before the opening credits, the beautiful Edwige Fenech is having sex in her taxi with a Spanish womanizer. Iberian’s wife spies on them with binoculars while they are in a wood. Then, faced with her betrayal, the woman shoots at the taxi with a rifle. Edwige throws the cheater out of the car and leaves, driving naked.
Twenty-six minutes later, Edwige Fenech takes off her shirt and shows us her perfect tits. One of the most beautiful breasts in Italian cinema from the 70s and 80s.
Twenty-eight minutes later, Edwige Fenech is dancing in a nightclub, in black stockings and a blonde wig. The show ends with a breathtaking striptease. Later, the actress seduces us with a black dress and garter belt.