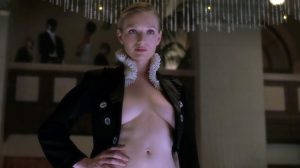 As for naked actresses, the third season of Westworld starts a little slow, but from the second episode, it starts giving us some interesting scenes. A full frontal nude of Thandie Newton in the second episode, then a full nude of Katherine Murphy in the fourth episode. Fans of the beautiful Evan Rachel Wood have to wait until the sixth episode, in which the actress gives us a nude sequence. There is also a sequence with vague lesbian allusions in the third episode, starring Tessa Thompson and Evan Rachel Wood. Don’t expect much, but it’s still quite intriguing.