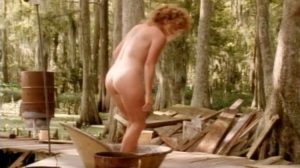 Don’t be fooled by the title: this “second chapter” of ‘Gator Bait is not the sequel to the movie made fifteen years earlier.
A newlywed couple is disturbed by a group of louts during the wedding banquet. The boors will be kicked out of the party, but they will want revenge.
The bride is played by Jan MacKenzie, who gives us several sequences of nude, from the bath in a bucket in the woods to his meeting with the peasants.