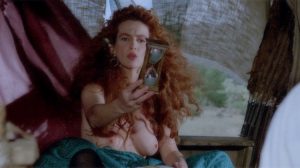 I picari is a film directed in 1987 by the Italian director Mario Monicelli. The film is inspired by some novels written between the sixteenth and seventeenth centuries.
The cast is full of great actors, but we are particularly interested in a fabulous Giuliana De Sio, who plays the role of a picky prostitute. Giuliana De Sio naked is spectacular.