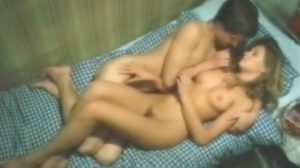 The film is also known by the title Laß jucken, Kumpel 6. Teil and is the sixth and final chapter in a saga that began with the film Laß jucken, Kumpel. The story takes place in the football environment, but a large part of the film is devoted to nude actresses and our favorite topic: sex. After a fifth chapter full of hardcore scenes, it’s back to softcore.
For the first twelve minutes, there is chatter, then the temperature rises thanks to Eleonore Melzer, who shows up in red lingerie and black stockings. Five minutes later, the actress performs the film’s first sex scene. Less than four minutes later, a man is massaging Sibylle Rauch‘s big boobs, but the two are interrupted by another man.
Ten minutes later Margit Ojetz undresses and shows us a beautiful full-frontal nude. Soon after, she and a man have sex while another man spies on them through the window. We see Margit again a few minutes later, soaking in the bathtub.
Two minutes later, Ulrike Butz and a man play a strange erotic game, hanging from the ceiling. Eight minutes later we witness a beautiful scene with Alexandra Beau, who undresses in front of a guy and then snuggles with him on a bed. At the same time, Alena Penz has sex on a black couch, taken from behind by a man.
Nine minutes later, the sexy nurses arrive: Jutta Hale and Britt Corvin. The two nurses undress while the patient listens to the soccer game on the radio, then make love to him. The last hot scene is offered by Margit Ojetz, who has sex leaning against a changing room sink.