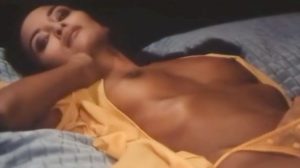 El periscopio (AKA …And Give Us Our Daily Sex AKA Malizia Erotica) is a Spanish erotic comedy that deals with one of the classic themes of eroticism: the young teenager who falls in love with an older woman, albeit by a few years. In this particular case, the boy with sexual urges is attracted to his neighbors, two beautiful nurses played by Bárbara Rey and Laura Gemser. The guy spies on them with a periscope, until the two take notice and…
The hot scenes come after about ten minutes when Laura Gemser takes off her nurse’s clothes and turns us on with white lingerie and stockings. After that, she goes nude to the bathroom. There is an effusion between Laura and Bárbara Rey a couple of minutes later. A very exciting lesbian scene follows between the two actresses.
Interlude: Mila Stanic takes off her clothes and takes a shower. In a later scene, the actress is engaged in sex.
We return to Laura Gemser, spying on the bed as she masturbates. A long, exciting scene follows, with Bárbara Rey and Laura Gemser seducing the protagonist.