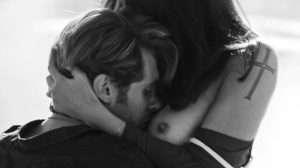 Based on the investigative book of the same title by Carlo Bonini and Giuliano Foschini, Ti mangio il cuore tells a story of family feuds that last many years. Set in Puglia, made in black and white, the film shows us rough and raw characters.
It’s the nude debut of the beautiful singer Elodie. In addition to having an exceptional voice, Elodie proves that she’s also a very good actress. The singer shows us her perfect breasts in some very exciting sex scenes.
There is another nude debut in the film, that of Anna Cavallo. The actress stars as a prostitute and gets naked in a trailer sex sequence.