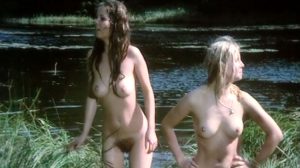 The original title of the film is Schulmädchen-Report 8. Teil – Was Eltern nie erfahren dürfen. The international title is Schoolgirl Report 8: What Parents Must Never Know. This is the eighth installment in a long saga of pseudo-documentaries about the sexual habits of young German schoolgirls.
First to undress is Christine Szenetra, who shows tits to a gardener in the garden. Later, the two have sex in a bed. Five minutes later, Manuela Widman has sex with her boyfriend. Elke Deuringer is the third actress to remove her clothes, in a very exciting sex scene.
Marisa Feldy and Marianne Dupont undress in nature and bathe in a lake, disturbed by a willing fisherman. Getting rid of the fisherman, the two girls have sex on the lawn with two friends. The next scene is played by Yvonne Dwyer, who has sex on a pool table. Very interesting sequence. Yvonne Dwyer has a perfect ass, and we can admire it again a couple of minutes later when the actress has sex on a lawn.
A choral scene follows, with some actresses in the shower. Among them are Gisela Schwartz, Puppa Armbruster, Sandra Atia, and Yvonne Dwyer.
The last sex scenes in the film feature Puppa Armbruster, Manuela Widman, and Gisela Schwartz.