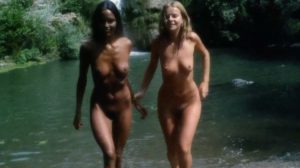 Emanuelle e gli ultimi cannibali (the international title is Emanuelle and the Last Cannibals) is the fifth chapter of the long saga of Emanuelle Nera. After the first, the other chapters were Emanuelle Nera – Orient Reportage, Emanuelle in America, Emanuelle – Perché violenza alle donne?. Except for the first one, with Bitto Albertini as director, all the others, including this one, are directed by Joe D’Amato.
Emanuelle Nera is a multifunctional character, who shifts genre based on the successes of the moment. In this film, which wants to follow the successes of Ultimo mondo cannibale, the woman goes into Mato Grosso’s jungle to investigate cannibal tribes.
The film opens in an asylum, where Emanuelle is doing a photographic reportage. Here, Laura Gemser caresses Cindy Leadbetter, lying in bed, with her pussy exposed.
Before leaving for the jungle, Laura Gemser has a couple of very exciting fucks, one on a pier, and one in a hotel bed.
As soon as she disembarks in the jungle, Emanuelle / Laura Gemser wastes no time: she’s in her bed for good sex, while Mónica Zanchi spies on her from behind a door and masturbates. A very intriguing voyeur scene.
In the following scene, we find Laura Gemser and Mónica Zanchi. This time they are together, in a lake, and they wash each other.
Later, Nieves Navarro makes an appearance. She’s lying on a bed and getting bored, so she masturbates. This is one of the hottest scenes of this actress, as she masturbates first lying on her bed, then doggy style. The fingering increases the desire for her, so the woman gets up and goes in search of a man to have sex.
In a later scene, we can admire two nude actresses sleeping in a camp tent: Annamaria Clementi and Mónica Zanchi.
After some jungle action, it’s back to nude actresses. A soldier spies on Mónica Zanchi while she’s sleeping half-naked, and cannibals strip Annamaria Clementi and put Nieves Navarro naked in a cage.
The film is in its final stages and there is more blood than sex, but there are still some nudes. Mónica Zanchi gets involved in a cannibal gang bang and shortly thereafter, Laura Gemser passes herself off as a goddess. She doesn’t find it difficult, because Laura Gemser is really a goddess.